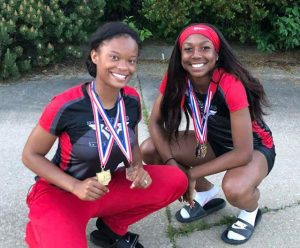 A historic Lady Spartan track season ended with the team’s leaders earning their way to the podium at the state competition.

Suerethia Henderson finished third in both the 100m and 200m dashes at the Division 1 State Championships. Briana Wright placed 5th in the Discus.

Both have had record-setting careers at Lima Senior. Suerethia, a three-time Indoor & Outdoor Ohio State Finalist, was named TRAC Female Track Athlete of the Year for two consecutive years (2017 and 2018). She is Lima Senior’s school record holder in the 200m dash and a member of the 2017 4x200m relay record-holding team.

Briana is a 2017 Indoor State Runner Up in the weight throw and finished 3rd in 2018. She is the Lima Senior Lady Spartan school record holder in the discus, pole vault, weight throw and hammer throw. She was named the 2018 TRAC Female Field Athlete of the Year.

Both were also selected to participate in the Midwest Meet of Champions which features teams from Ohio, Michigan and Indiana. The last time a Lady Spartan was selected for the meet was in 1999.

No Events This Week

Events are added by athletic staff.
View All Events